We call it The Cabin because I suppose most of our my parents labor went into building it and the pond.  I’m not sure why we don’t call it The Pond, but we don’t.  Before it was The Cabin,  it was The Farm.  This was when my grandfather, whom we called Papaw and later Papaw Hawkins, so as  not confuse him with my Dad whom my children and nieces also called Papaw,  raised cattle there.

The cabin was built in the 80’s my  boys being around two and five, now 23 and 26, my daughter not yet born.  They loved it as you can imagine.  Running wild,  seeing wildlife and even a deer shot for food.  My mother, because she is a wise woman, would take the boys only one at a time, with her and Dad,  to “enjoy” for the weekend.

You just can’t imagine the quiet and solitude there.  It is like being transported back in time.  No phones, no lights except the ones from inside the cabin, and no agenda.  We are always sighing and saying “Oh, it’s so peaceful here.”  If we have said it once we have said it a million times!

One weekend, my mom and dad had taken my younger son Connor with them.  Connor was never still.  But, at one point in the weekend mother and Connor were sitting on the porch swing, swinging.  His little legs,  usually in perpetual motion,  accenting the methodical rhythmn of the swing.  After they had been swinging awhile (unusual for him to be in one place that long) she said he looked up at her and said “Isn’t this Peace?”  Yes, darling, it sure is. 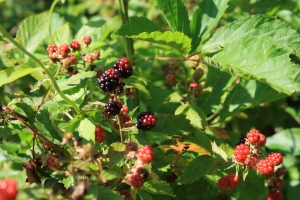 Connor on the porch swing