So a couple of posts back I commented that it had been years since I remembered the weather being in the teens.  1997 to be exact (per our local weatherman) was the year.  Boy, am I ever glad I  purchased frost cloth over the past few years.  I am going to buy even more now.  I found these nifty covers on line which I should have bought, but will asap.  http://www.heirloomseeds.com/supplies.htm

They will be great since they  actually fit OVER the plants, pot, etc. instead of having to wrap them “around” the plants.  Which means they won’t fall down, looking like they lost their trousers and exposing themselves to the cold.  Arghhh.  Very annoying.

The few plants/tree/shrubs I was concerned the freeze would harm, seem to have come through unscathed.   The first one I worried about was my Texas Mt. Laurel.  It is in a corner, protected by fence on both sides and I did wrap it.  But, it was one of those that the wrap fell down and exposed the top.  However, there was no damage.  I knew this tree was hardy to 20 degrees, but we were in the teens with fierce north winds.  Another shrub I wrapped, were two wax leaf legustrums which face west and are located next to the house (one on each side of entry).  They also seem to be ok.

I also had coverings on my fall veggies, three large pots with arugula, watercress and lettuce which all came through fairly well.  The one exception was the kale.  This is the one I would have thought would do well. (Maybe in a sunnier location?)

My one disaster was my terra cotta pot which broke. 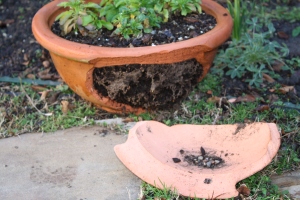 So sad.  I have only myself to blame.  I should have moved it to the garage, but oh well.  Terra cotta is so unpredictable.  I have others I left out and they are fine.

I have to say my garden looks terrible.  Not just because it is winter but because it just looks, well, neglected.  This week we are  back up into the 60/70’s.   I know, crazy, right?  Welcome to Texas.  So, hopefully I will be able to get some weeding, pruning, and general cleanup done.

I am also planning to check my seeds for viability so I will know what to order.  I am still in the “thinking” stage but I had better get into the “doing” stage or ALL my produce will be coming from the farmer’s market.